Read - Breaking the Habit of Being Yourself, by Dr Joe Dispenza

I’ve had a huge focus this year on mindfulness, compassion and what makes people tick, so I was instantly drawn to this book by its title a few weeks ago and I haven’t put it down. Dr Dispenza is able to explain the mind – body connection in a way I haven’t heard before, and, most importantly, how to uncover and then short circuit subconscious beliefs and attitudes that might be ruling your life, and form new neural pathways for better outcomes. You’ll see yourself in a completely different way and might gain a new appreciation for meditation.

I’m a bit late to the party as Dope Lemon, (another incarnation of Angus Stone) actually came onto the scene in 2016. The sound is less pop and more folk, blues and trip-rock. My tip is to skip the albums and go straight to the artist radio for the perfect sound accompaniment to road trips and hot summer afternoons!

I’m obsessed with smoothies right now! I recently took part in a fitness challenge and had to get the bread and oats out of my morning routine (many a tear was shed), but I invented this smoothie recipe and now I’ll never go back to stodgy carbs for breakfast. Using coconut milk instead of almond milk is filling in a way that doesn’t leave you bloated. I like mine super thick so I don’t use too much liquid and use frozen berries.

Throw in the blender for about a minute – delicious! 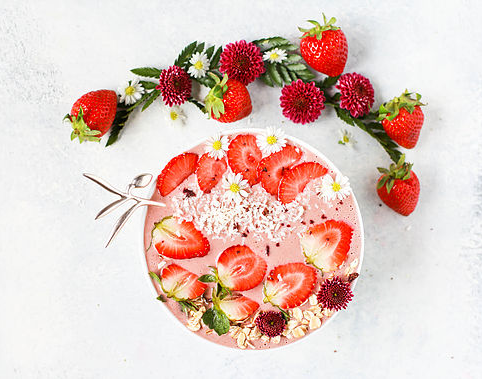